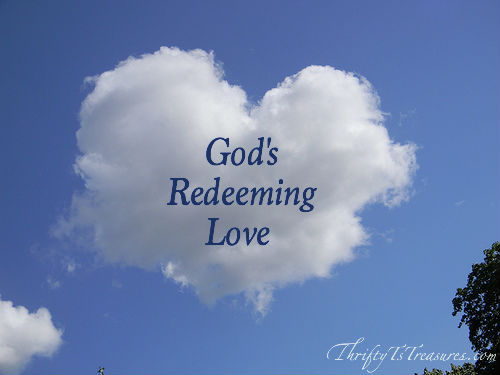 We’ve all heard stories of God’s redeeming love and today I’m going to share mine with you.

Valentine’s Day. The day that you’re supposed to share with the one you love. Well, it’s also a day that many people feel unloved, even rejected because they don’t have anyone to share it with. I’m convinced that companies conjure up these holidays just to make extra cash, and we’ve fallen for it hook, line and sinker.

If we love our Valentine so much why aren’t we telling them throughout the year instead of just on one day. Ok, that’s not what I’m here to talk about and is for another day…

If you’re not a fan of Valentine’s Day I totally understand. It hasn’t always been one of my favorite days. In fact, for quite a few years I pretty much despised it.

If you’ve been hanging around here very long you’ve know a bit of my story, that I was previously married. Well, one thing you probably don’t know is that my first husband decided to leave and move in with his girlfriend on Valentine’s Day. Now, in all fairness, he may not have known that it was Valentine’s Day but I’m guessing that she knew. Who knows? One thing I do know is that the situation was hard enough as it was and that was the icing on the cake.

So, every Valentine’s Day after that I couldn’t help but remember what had transpired years before. As you can imagine, it was like scraping up an old wound.

I’ve said it before and I’ll say it again; God is so neat. Jeremiah 29:11 is one of my favorite verses. It says, “For I know the plans I have for you,” declares the Lord, “plans to prosper you and not to harm you, plans to give you hope and a future.”

Even as I was walking through that difficult Valentine’s Day and the ones following, God had it all planned out. You see, Trent knew my story and what had happened so he decided to change my memory of Valentine’s Day.

I remember that day very clearly. I was talking to a girlfriend at work and she was asking me what my Valentine’s Day plans were. Trent had invited me over to his house and was going to make us dinner. Sweet, right? So she asks me if he’s going to propose. I told her there was no way he was going to propose because he had told me that he wasn’t sure if he was ready.

Well, seven years ago today he did propose! He made me dinner, took me outside under the stars and asked me to marry him. Then he brought me roses, dozens and dozens of roses (no, I’m not kidding) and gave me the most beautiful engagement ring I’ve ever seen.

Never in a million years would I have guessed that would have happened. But God knew; He was redeeming the years before that were so hard and tragic.

I don’t know what your story is, what difficult road you’re walking down or where God has you right now. But, one thing I do know is that God is crazy about you and loves you more than you could ever imagine. He has a plan for your life – a plan to redeem those difficult years. And, even though you can’t see the bigger picture and the road might seem dark right now, He knows what He’s doing. All I can encourage you to do is trust in His plan.