As I watched from the riding lawnmower, I couldn’t help but smile. Jayden had come over and he and Trent were waxing the car. It was a sweet moment and I watched as they worked together!

For those of you that don’t remember, Jayden is our 7 year old neighbor. He likes to come over and hang out, and we don’t mind a bit!

That night he sat down to eat with us but lingered by my chair on the opposite side of the table. (And, yes, he’s eaten at our house even though I made him eat his veggies.) I wasn’t sure what he was up to but when I went to sit down he pulled my chair out for me. How precious!!! I’m not sure where he got that idea but, of course, I made a huge deal out of it and thanked him for being a gentleman!

As I spooned a helping of broccoli onto his plate he let me know that he likes broccoli. (I’ve heard that one before!) So, of course, I asked him if he wanted a bigger helping. He said that he’d better finish what he already had. I agreed that was a wise decision! 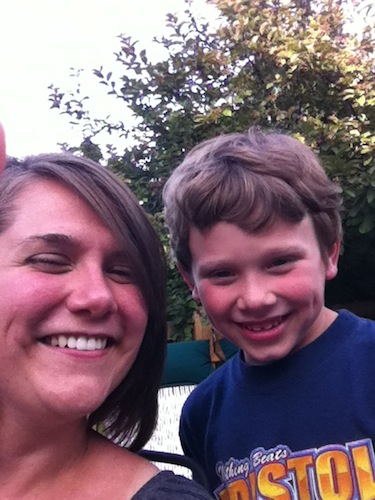 (1) A few days ago he told us that he used to have a frog – that he named Bull. (HA!) He said that every time he came out onto the back porch he would call for Bull and Bull would pop out. We hear stories like this all the time and I’m not quite sure how truthful they are but they sure make us laugh. Sadly, Bull didn’t make it and has since died.

(2) After his first full day of school, Jayden came over. He told me that he was depressed because his girlfriend (of two years) had moved to Gatlingburgh. He told me that he was so depressed that he hadn’t even eaten dinner. I told him that there was plenty of time for girlfriends, but he didn’t want anything to do with that thought. He told me not to judge him (which I found out meant not to tell him what to do). Ha! He even had her picture with him and said she was the most beautiful girl he’d ever seen. He was absolutely pitiful and I tried my best to contain my giggles.

It’s been neat to see Jayden make tiny steps forward. I about fell over the other day when he said thank you (on his own) and then followed it up by yes ma’am. Of course, I’ve never asked him to say yes ma’am but someone must have taught him that’s polite.

He also told me that he cleaned the bathroom on his own and his grandma didn’t even ask him or know that he’d done it! Again, I made a big deal about it and told him I was so very proud I him.

Sadly, he hasn’t been coming to church with us as much. (Last night he told me that it’s boring and that he knows everything about God.) Trent and I feel that God has put us next door to Jayden as missionaries and we are hopeful that the Lord is still working on his heart.