God Stretches Us To Mold Us Into His Works of Art

I’ve put off writing this post for the last two days, but God keeps bringing it to my mind and pushing me to write it. Why have I been putting it off?  Well, to be quite honest, it makes me vulnerable. And being vulnerable is a difficult place to be. But I’m going to press on because one thing I’ve learned in the past few years is that someone may be able to grow or learn from my vulnerability. 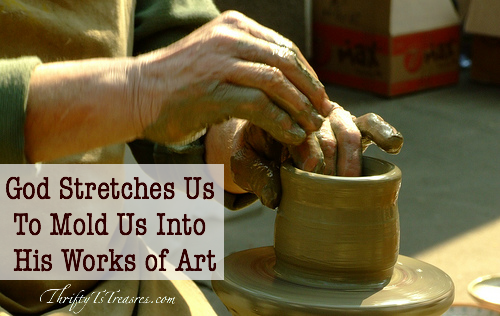 What you probably don’t know about me is that I’m a pretty quiet person, until you get to know me. I don’t like to be in front of a crowd or the center of attention in a group of people. I’d rather watch people from the sidelines.

Sunday night I was minding my own business, waiting for the church service to start when a gentleman (he’s actually one of our deacons) came up to me. He leaned in, and I could tell that he wanted to tell me something. As I listened he said that our pastor was going to give an invitation at the end of the service and he’s been asking for ladies that would be willing to counsel. The deacon asked if I’d be willing to walk down front when the invitation came and be available to counsel.

To be quite honest my first thought was no. And, I kinda looked at him like he had two heads hoping he’d change his mind and ask someone else. Alas, he did not!

Now, I have no problem counseling with people. In fact, one-on-one is more my speed. The problem was having to walk down the aisle and stand at the front of the church. As the worship team started to sing their first song I began to get nervous. Sounds silly, right? Well, it wasn’t to me. I told myself that I was going to have to put it out of my mind and not worry about it until the invitation came.

My fears grew when my pastor started speaking. I paid attention as best I could – it was a great sermon on forgiveness. (See, I was paying attention!) As the invitation drew closer I realized that I needed to figure out why I was really nervous and afraid. Sure, I didn’t want to walk down the aisle and stand in front of all of those people, but there was something else nagging me.

As I processed through my thoughts I realized that I was worried about what people were going to think about me. They might say something like, “Who does she think she is standing up there?” or “What makes her think she could counsel people?” As I began to take my thoughts captive I realized that God knew that I was capable or He wouldn’t have had that deacon ask me to go forward.

He was stretching me. In fact, that very afternoon I had read an article where the writer was encouraging us to step out of our comfort zones because great things happen when we do. Coincidental? I think not!

I’m thankful that God stretched me and that I took the opportunity that was presented to me. And, even though I didn’t counsel with anyone, I know that God simply wanted me to be available.

What’s He calling you to do? Maybe you’ve been trying to get out of it (kinda like me giving that deacon a funny look). I don’t know what it is, but if God calls you to do something you better move. If you don’t move, that opportunity could slip away and He just might use someone else. In the end you’ll be the one who’ll miss a blessing. Let Him stretch you so that He can mold you into the work of art that He wants you to be!

FacebookTwitterRedditPinterestEmail
Meet My KryptoniteSaving $600 With A Few Hours of Work!