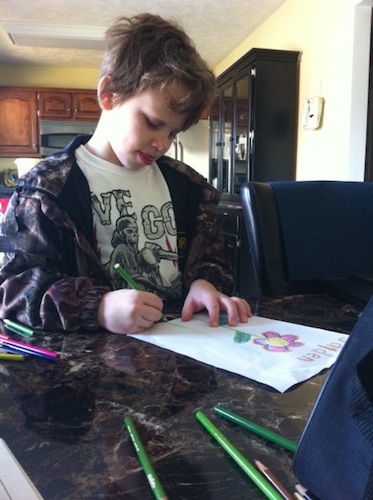 I’ve told you before about our little neighbor boy, Jayden! Trent and I have no doubt that God’s placed him next door to us so that we can love on him and shine the love of Jesus in his life!

Last week his grandma called. She and her husband were going out of town for a few nights, and she wanted to know if we would give her sister a break by letting Jayden spend the night on Saturday night. How could we say no? 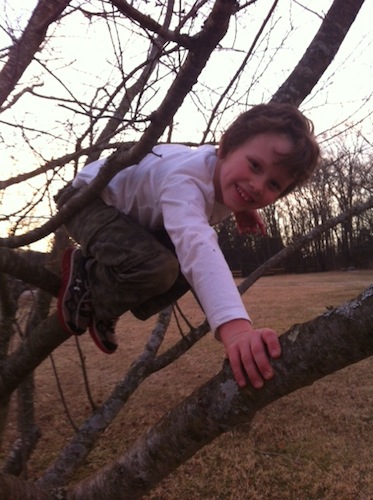 Well, the doorbell rang at 8 a.m on Saturday morning. :O) Our time with Jayden started a bit earlier than we had planned. (Hey, I remember how it was to be a kid and get excited about things.) It was a full day of drawing, playing outside, battling on the Wii and much more.

He was so funny! After snapping the first couple pictures of him in the tree, he wanted to have a photo shoot. What a ham! 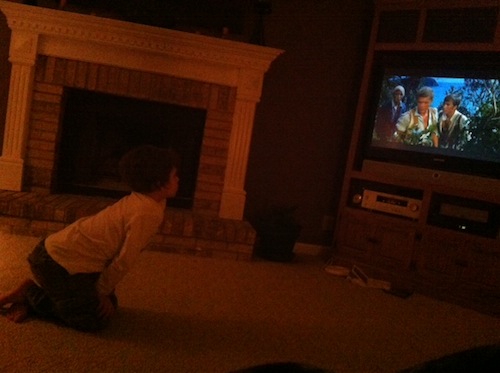 This was probably my favorite part of the day. I had told Jayden that I was going to let him pick a movie for us to watch that evening. I pulled out my kid friendly movies, both young and old. He landed on Toy Story 3, but not before I tried to convince him that he would like Swiss Family Robinson. He was extremely adamant that he would not like the movie (just by looking at the cover) and quickly decided that he did not want to watch it.

Now, if you’ve ever seen Swiss Family Robinson you know that it has all kinds of animals in it. Jayden is always talking about animals, so I knew it would be right up his alley. The trick was just convincing him to watch it.

Movie time started early. We watched Toy Story 3 and still had time for another movie before bedtime. So, Trent and I decided to put in Swiss Family Robinson. I told Jayden that he could either sit and watch the movie or go upstairs and play by himself. He quickly went upstairs.

Let’s just say that after we announced that there was a lion in the movie, he quickly came downstairs and was hooked. (Victory!) He even said, “I didn’t think I would like this movie.” But as you can see by the picture above, he loved it! 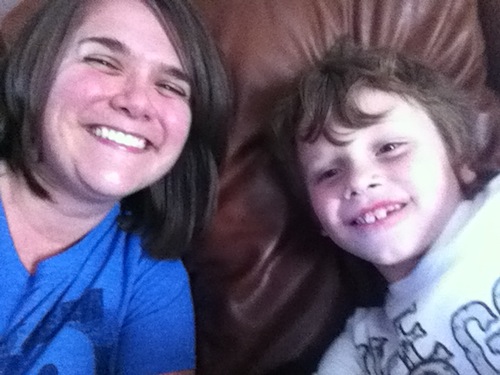 Can you believe that this little guy slept almost 11 hours. We thought for sure he’d be up at the crack of dawn!

When I asked him what he thought about spending the night, he said, “It was fun.” After letting him know that he’s welcome any time, I teasingly let him know that he’ll have to learn to trust me when it comes to picking out a movie he would like. He just grinned!

How was your weekend? Did you do anything exciting?