This new series came about because My Surprise Pregnancy Journey series resonated with so many of you! Tales Of An Inexperienced Mom is a series that will be raw and candid. I plan on sharing the good, the bad and the ugly in hopes that it will, once again, let you know that you are not alone with your thoughts and feelings!

Motherhood Started With A Bang For Me

There are certain expectations that you have when you think about becoming a new mom. For me, one of them was taking my child home a few days after he was born. It’s a normal and healthy expectation, right?

But, that’s not how motherhood came to be for me.

Within a few minutes of delivering our little guy, he was quickly whisked away to the NICU. Even though they’d put him on my chest for a few minutes and lifted him up for me to see before they wheeled him out of the room, it wasn’t until hours later that I was able to meet him.

I had been told by the nurses that he had respiratory issues and that he was hooked up to a CPAP machine. But even as they wheeled me into the NICU I wasn’t sure what I was going to see. As I stared down at this tiny, helpless child, it was difficult to see him hooked up to this machine that was helping him breath consistently. As you can imagine, it was an emotional time for both me and Trent!

Even though I wasn’t able to hold him, the nurses knew that skin to skin contact was important for him. They were so very kind to this brand new momma and gently guided me to place my hand on his little chest. He was hooked up to all kinds of monitors so it was oh so very intimidating. 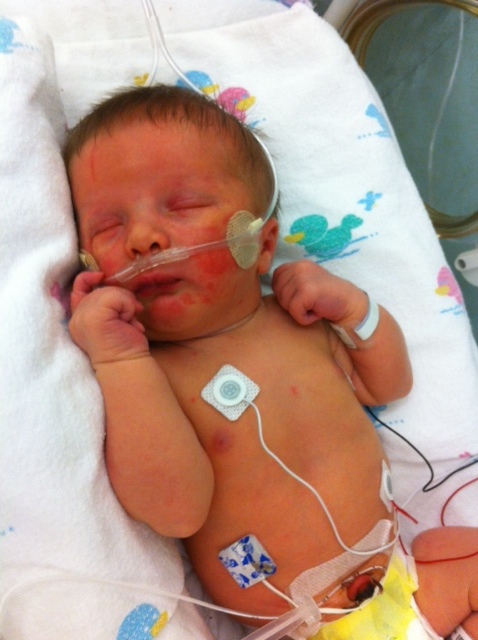 Thankfully by the next morning the CPAP had been removed and replaced with a cannula (see above). It was a step in the right direction for little Dalton!

By his second day in the NICU, I was discharged from the hospital. It was the oddest feeling that night when we left the hospital without him.

All throughout my pregnancy I had planned on breastfeeding him. Each day Trent and I would make the 30 minute drive and arrive at the hospital by 8 a.m. I’d feed him and then pump so that he would have milk throughout the night while I wasn’t there. We’d stay all day and leave after his 8 p.m. feeding. Then I’d continue to pump every three hours at home throughout the night. Even though I was able to rest a bit during the day at the hospital, I was exhausted.

By day four they told us that we’d be able to room in with him the next night (stay in the hospital overnight with him in our room and leave the next morning). When we came in the next morning, we learned that his levels had dropped overnight and we wouldn’t be able to room in after all! I’d be lying if I told you we didn’t get frustrated, but the situation was out of our hands and there was nothing we could do!

This happened two or three more times before we were finally able to room in with him on day eight.

I was physically and mentally exhausted but the Lord had given me peace that little Dalton was right where he needed to be. I knew that he was being given the best care possible and that the Lord was with him when we had to leave him at night.

Even amidst the chaos that was our lives for those nine days in the NICU, thankfully we were able see the positives in the situation.

I’ll never know why the Lord chose to have Dalton in the NICU during his first nine days of life. Maybe it was to help ease me into motherhood. (If that’s even possible.) Maybe it was so that I could learn some fabulous breastfeeding tips and tricks. Or maybe it was to teach me to rely on Him more. Whatever the reason, I’m so thankful that He was with us the whole time!