Share Your Thoughts | Is Social Media A One-Sided Conversation? 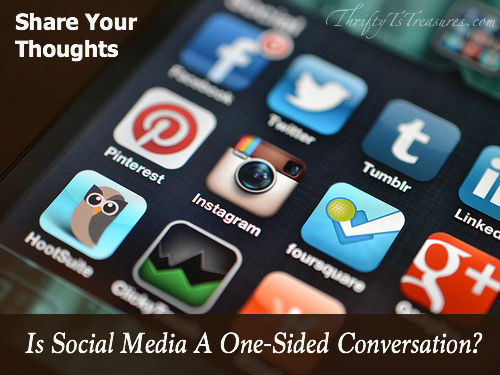 I have a subscription based service that I use on a weekly basis (to be fair, I’ve chosen not to share the company name). When I went to use the service a few weeks ago, there were technical problems. I went to their website to contact them to let them know about the problem. Except for the owner of the company and the marketing person, the only other contact information I saw was social media!

I quickly contacted them via social media letting them know about the problem. However, I had contacted them with a question the week before and had received no answer. So I didn’t really expect them to contact me back.

After waiting around for 45 minutes, the problem still wasn’t fixed. Frustrated, I hopped back over to their website and sent an email to the only addresses available. After letting them know about the problem, including their lack of communication on social media, I politely asked for a refund. Honestly, I didn’t expect a refund, but I did expect a reply. After all, that’s just common courtesy.

After about an hour, the company finally contacted back via social media to let me know they were working on the problem. Thankfully, the service problem was fixed shortly thereafter!

As I logged back in to use the site, it seemed that they were again having the same service issues. Since I had to wait an hour for a reply the week before, I wasted no time in contacting them via social media. And even though they didn’t reply, I was glad when the service problem was fixed within a few minutes!

The next day I received this email from the owner, the person I had originally emailed about my problem. (I’ve changed a few words to hide the identity of the company.)

“For the second consecutive week, I have read your [posts via social media about our service]. Tonight, you said we once again had a glitch. We did not have technical issues…and you were the only complaint that was voiced tonight…

…We are always willing to help you diagnose the problem, but I would like to ask nicely that you refrain from posting your service issues on social media. If you have an issue, please email [support email address removed].

When you put that out on [social media], you are basically saying our service doesn’t work, which wasn’t the case whatsoever tonight. It is detrimental to our product and our image. It isn’t right, and even if you are frustrated, you are hurting a company that is trying to do right…Think about it from our perspective.

If you would like to discuss via the phone, I will be glad to diagnose the issues you are having further.”

Honestly, I was taken aback by his reply. What do you mean you want me to “refrain from posting service issues on social media”? How else do you want me to contact you? If it’s so “detrimental to your product and image,” why didn’t you reply back and share your side of the story with the rest of the social media world? I didn’t get it (and still don’t).

After cooling down for a few minutes, I sent back a reply. Here’s what I pointed out:

Within 10 minutes he replied back with, “We will not contact you back about support via social media. Will not happen, so in the future understand this.”

I continue to be blown away by his response and just have to shake my head and let this one go! Had it not been a subscription based service that I’m paying for, I wouldn’t have made a big deal about it. But, as you know, we work hard for our money!

(Sidebar) When GoDaddy had major service problems months ago they had people contacting them left and right via social media. They continually sent out messages to let users know they were working on the problem. If such a large company is willing to show their bad side and admit a problem, why shouldn’t a small company? After all, we all know that life isn’t all unicorns and rainbows, right?

Ok, enough of my ranting. I want to know what you think!

Would you have replied the same way I did? Do you think social media is a one-sided conversation (especially when it comes to companies and brands)?