A few months ago I invited our little neighbor boy to go to church with us. For various reasons he wasn’t able to go, but his grandpa assured me that it would be great for him and that he wanted him to go.

Sunday afternoon I saw him outside playing and quickly went outside to invite him to come along with us to church (we go on Sunday nights). He quickly let me know that he wanted to go and ran to his house to ask permission.

Just a few hours later I stopped to pick him up. He come out with a huge smile and had on his Sunday best (he had a sports coat on – it was adorable). In his hand he carried a piece of paper. He quickly handed it to me and let me know that he had made it for me! 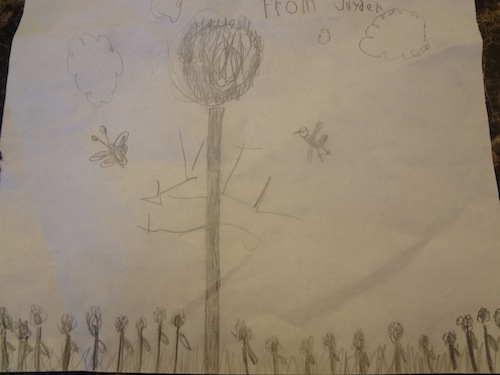 I learned a lot on our short ride to church (he likes to talk). He lives with his grandparents and dad. He told me that his mother does drugs and that he doesn’t see her. (Oh how this broke my heart.) And, even though he acted as if it wasn’t a big deal, I’m sure it hurts somewhere deep down inside for this strong little seven year old.

He told me he had been to church before to see a baptism, but I doubted the service he went to was going to be anything like our children’s groups/service. I walked him into the large room and he sat enthralled as the musicians practiced.

When I came back he still had the big smile on his face. He quickly showed me the Jesus puppet that he had made and let me know that he learned that Jesus didn’t speak for 400 years. Oh how I had prayed that God would speak deep into this precious little one’s heart and that he would come away with something, anything.

On the ride home, I asked him if he would like to come back next week. He quickly said yes, but went on to tell me that his bottom was sore from sitting so long. (This kid is a barrel of laughs!)

I’ve gotten myself into car rides with an earful (and more stories for you), but I’m quite ok with it because it makes my heart happy at the thought of this little one coming to truly know Jesus someday.

FacebookTwitterRedditPinterestEmail
Family, Apple Dumplings and A Movie…Taking Our Worries Captive