Making Your Finances Work For You 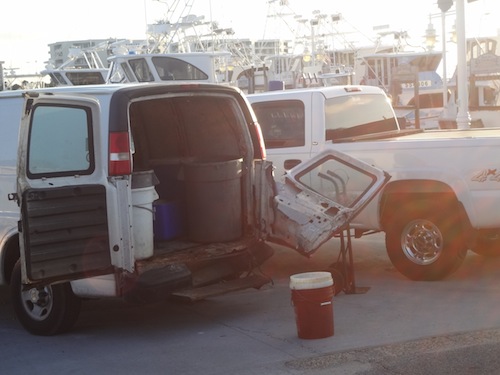 Nowadays you never know what you’re going to see as you’re out and about! I mean, it’s not every day that you see a van with the door {almost} falling off! How could I not take a picture? (I wasn’t bold enough to take a picture when the door was shut because I didn’t want him to see me, but let’s just say that there was a padlock involved!)

I have no idea what the van owner’s story is but I couldn’t help imagine what it might be. Perhaps he’s barely getting by on paying his bills and doesn’t have the extra money to get a new van. Or, perhaps this is his work van and he has a perfectly good truck parked in his garage! No matter what his story, he’s making his situation work for him!

I remember a season in my life when friends would invite me out for dinner but I didn’t have the extra cash so I wasn’t able to go. Missing dinner with friends wasn’t the biggest deal in the world but it sure would have been nice. That was a season of life and I had to forgo a few dinners out to make my financial situation work for me.

Even though you might not have a van with the door almost falling off, you could have any number of situations that you can compare to this one. Perhaps, like my story, you’re doing without a luxury (yes, dinner out with friends is a luxury) to pay your bills. We are all in different seasons of life and have to make our finances work in different ways. No matter what season you find yourself in, remember it’s just that, a season. More than likely you won’t be in that season for the rest of your life. While it may seem like a big deal know you’ll probably look back years from now and realize that you even learned a few things during this season.

Have you been through a dry season financially? What did you do to make your finances work for you? Share in the comments.