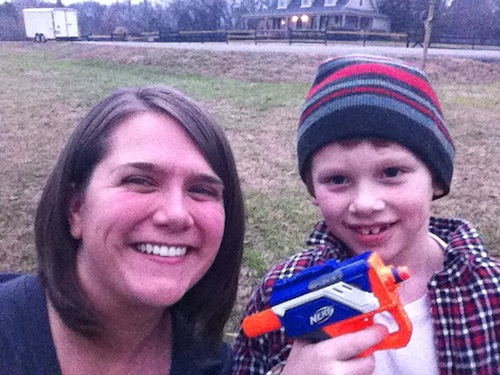 Ever since the time change, we haven’t seen as much of Jayden (my neighbor friend) since he’s supposed to be home by dark. I know his grandparents would let him stay after dark (since it gets dark by 5 around here), and I’ve offered to walk him home, but I think it’s because he’s a bit scared of the dark.

When he came over last weekend he brought Trent a Wii hunting game. After they got tired of that game the three of us had a ball playing Mario Kart.

A few days ago when Jayden came over it was already starting to get dark, so I knew he wouldn’t be able to stay long. He asked if we could play the Wii and I said yes. It’s a rarity for me to agree to playing video games, especially since it sounds like he plays them a lot at his house. (It may sound odd, but I want his time spent at our house to be quality time, and I don’t qualify video games as quality time.)

Yesterday when he came over he again asked to play the Wii. This time I said no. I offered to play Uno, Jenga, or have a drawing competition (he loves to draw). He didn’t want to do any of those things so he turned around and headed straight for the door. I told him I’d see him later. And just like that, he was gone.

I’m sure you can imagine how I felt! God has put us next door to this precious little boy to love on him. I’ll admit that I was a bit sad, but I immediately thought of the post I wrote a few months ago about sticking to what we say with kids. So, I picked up my computer and went back to work.

Not five minutes later I was surprised to hear the doorbell ring. Jayden was ready for war…a Nerf War. We ran around the yard, shooting bullets and laughing. Now that’s what I call quality time!