Living For An Audience of One 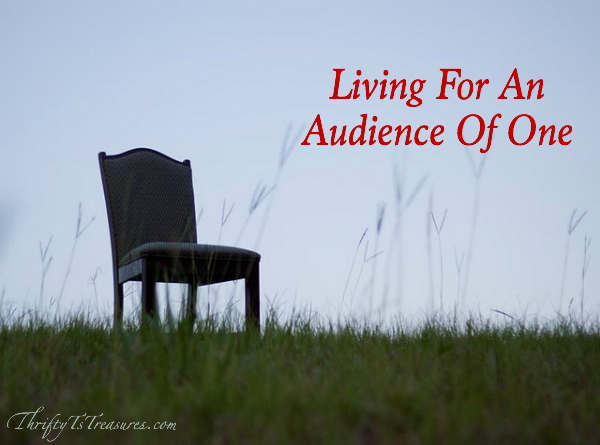 Unless you’re living under a rock, you’ve likely been hurt by someone in the past few months, or even days. Maybe someone has said something ugly to you, or even behind your back. (That’s happened to me and it’s so very painful.) The saying, “sticks and stones will break your bones but words will never hurt you” is a lie. Words sting! They can cut deep into our souls and make us question ourselves.

I’ve been hurt by plenty of people in this life. Sometimes it’s easy to brush off the ugly comments, but other times it’s difficult, especially when it’s someone that’s close to you.

My pastor shared this years ago – I’ve shared it with you before and I’ll likely share it again because it’s so good. There’s only one person in this life whose opinion matters. He’s already cast His vote and it’s the only vote that counts!

Isn’t it amazing to think that we only have to worry about one person’s opinion? (I don’t know about you, but that’s pretty freeing for me!) He knit us together in our mother’s wombs (Psalm 139:13) and is crazy about us just the way we are (flaws and all).

When those harsh words come, we need to remember that we’re living for an audience of one.

When someone lets us down, we need to remember that we’re living for an audience of one.

When we find ourselves wanting to please someone, we need to remember that we’re living for an audience of one.

I could go on and on…but you get the point.

When we change our mindset and strive to only “impress” the Lord, it totally changes us! This change doesn’t mean that harsh words won’t sting, but it just makes them a bit easier to handle!