Last night was our monthly family fun night at my house.  This month my sisters and nephews that live out of state were in town so we had a bigger party!!  Since all of the cousins were together we had an Easter egg hunt.  The kids were so excited to hunt for their eggs.

My sisters had originally planned to let them hunt for empty eggs and just have a golden egg with a great prize in it.  I wasn’t about to let them hunt for empty eggs; what fun is that???  So, we headed up to my “grocery store” to see what we could find to put in the eggs.  We had no problem filling the eggs, and even had a certificate for a trip through the “grocery store” for each kid to pick out one item. 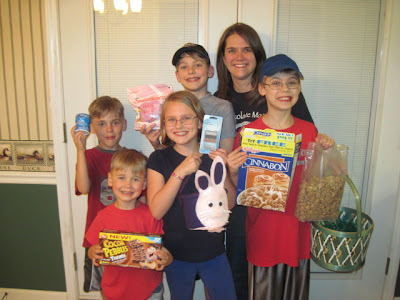 It was fun to watch to see what each kid would pick.  While my four year old nephew, Lincoln, was waiting for his turn he mentioned that he might like to get a can of soup.  After I stopped laughing I called Charity so that she could help him find something he would really enjoy.

Thursday night Lincoln and I made a quick grocery store run.  After we had picked up our items he says, “We always get cookies.”  Well, what kind of aunt would I be if I didn’t get him cookies?  So, we headed over to the cookie aisle and I let him pick what he wanted. 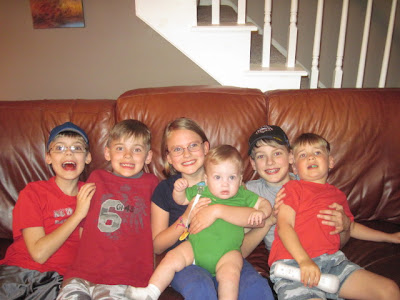 From left to right, Joel, Levi, Elizabeth, Cole, Jacob and Lincoln.  Family is so important and I’m so thankful for mine.