Now, you may be thinking, I don’t really have much. And, while I may not know your situation, I’d beg to differ. You see, those of us that have the privilege to live in America, even if we have what seems like very little, live generous lives compared to the rest of the world. If you don’t believe me, take a missions trip to another country. I promise that it will change your life, but that’s another story! 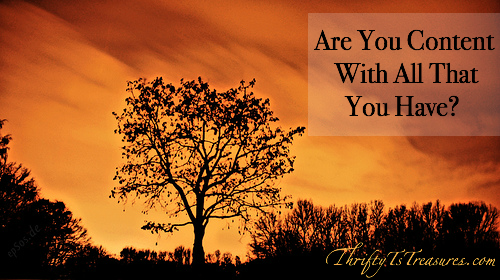 It was time to leave for our road trip to Arkansas. I had just finished putting my luggage in the car and was doing a final walk through of the house making sure it was in order before we left for the next few days. And then it hit me! As crazy at it sounds, I was overwhelmed with gratitude that I have a house to come home to! Sure, there are plenty of things I’d like to upgrade in our house, but in that moment I was completely content and filled with gratitude!

Because it was a business trip, we drove a rental car last week. Trent was able to talk the guy into letting us drive the shiny, new Nissan I had spied when we pulled up! We had a blast driving the car but I realized that I was just as content with my paid for 2004 Nissan that actually had more bells and whistles.

My Lack of Contentment

Lest you think I have this contentment thing figured out, I’m sharing a story of my lack of contentment. Over the past few months I’ve noticed that our internet has become slower than it used to be. When I called our provider he told me that I was on their lowest package. For $X I could upgrade to their higher package with better speed. As I hung up the phone I wasn’t very happy that our internet had slowed down and now they wanted me to pay extra for the speed I previously had.

Well, last week when we were out of town I realized that even though my internet is slow, it doesn’t compare to that of the resort we stayed at. Let’s just say that their main client draw isn’t someone that’s going to be on a computer in their room all day. It. Was. Slow. And even though I was frustrated, seeing how slow it was made me thankful for what I had at home. Isn’t it sad that’s what it took for me to be thankful?

When I searched the word content in the Bible (I love BibleGateway.com, by the way), I found this passage that I don’t think I’ve ever read before. Ecclesiastes 4:8 says, “There was a man all alone; he had neither son nor brother. There was no end to his toil, yet his eyes were not content with his wealth. ‘For whom am I toiling,’ he asked, ‘and why am I depriving myself of enjoyment?’ This too is meaningless— a miserable business!”

I don’t know about you, but I don’t want to be like this man walking through life uncontent and unhappy. Whether you have a little or a lot, you have plenty to be content about. Why not stop right now and thank God for all that He’s given you?