A Peek Into May | New Landscaping, Haircuts, and More 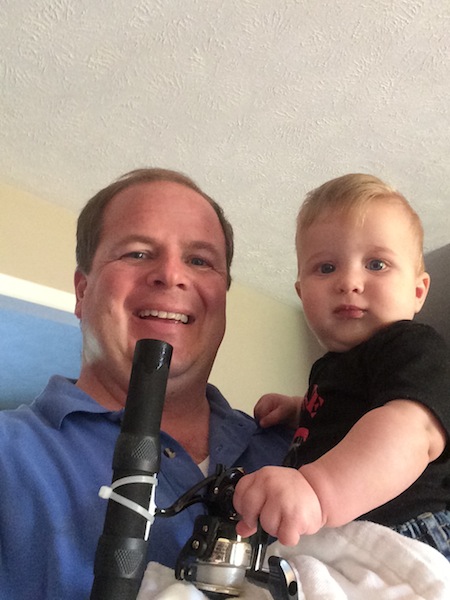 I left these two alone for a few minutes (I was actually out mowing the grass – my favorite outside chore) and came back to find this selfie on my phone. Too cute!

For those of you that can’t tell, Trent has Dalton holding a fishing rod. You can never teach them too young can you? 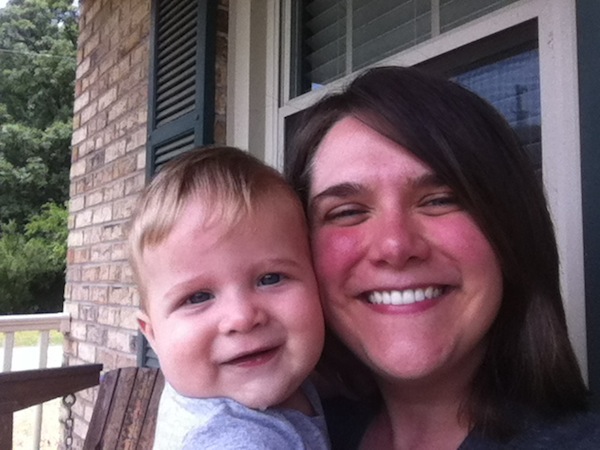 I cannot tell you how excited I am that this project is done. As I was looking for before pictures I couldn’t believe that we’d been working on this project for so long. Of course, “working” is quite an understatement. Maybe the better word is dreaming. Our landscaping has never been my favorite and I’ve been dreaming of having it redone since I moved in nearly nine years ago.

The picture above is an after picture, and I’m beyond ecstatic at how the final project turned out. Of course the lilies are blooming, but I can’t wait for the Hamlen Grass and Sonic Boom to start blooming too!

Below you’ll see a slow progression of the before and after. The top pictures were taken in 2013. As you can see, the ginormous bushes had overtaken the landscaping (and the house). Instead of trimming up some of the bushes, we decided to pull them.

The middle pictures are after Trent pulled out the bushes. (They were so big and strong that he broke a couple ropes pulling them out! It was quite a fun adventure!) Just pulling those three bushes made a huge difference. 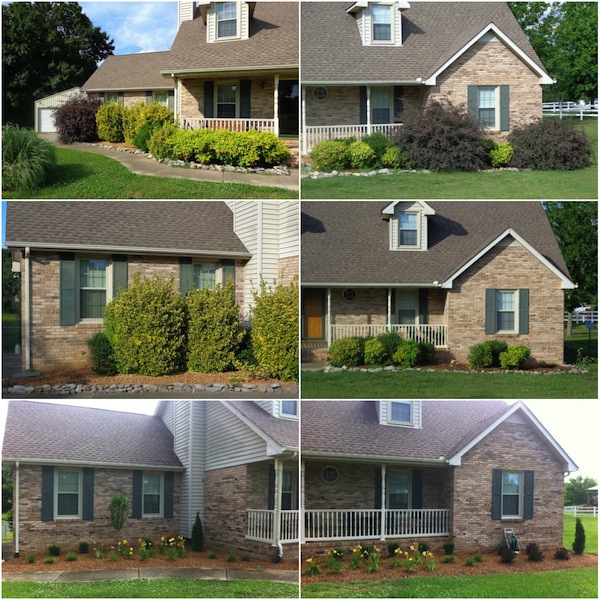 Doesn’t it look so much better? I told Trent that the house can now breathe. HA!

I’m so glad that we saved up to pay for this project. Our friend, Brook, did a much better job than we could have ever done, not to mention the fact that designing (and planting) landscaping is not one of our gifts. This project would have taken us forever, and would not have been fun. Sometimes it’s better to pay to have projects done. 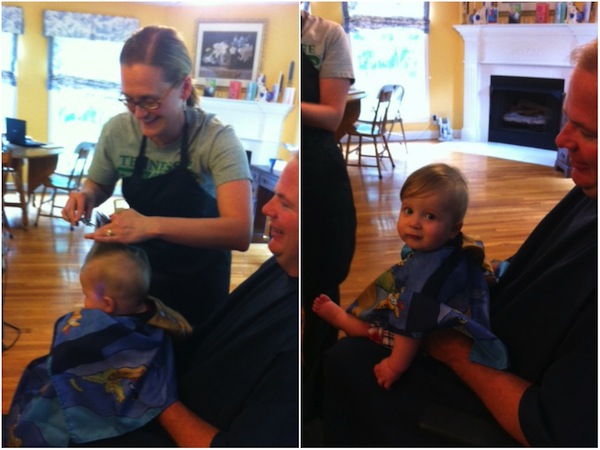 When Dalton’s hair started falling in his eyes we knew it was time for a haircut. I decided to be the camera woman and let Trent hold him. I wasn’t quite sure how he would react, but he did great. Not one tear was shed and he didn’t get fussy at all! 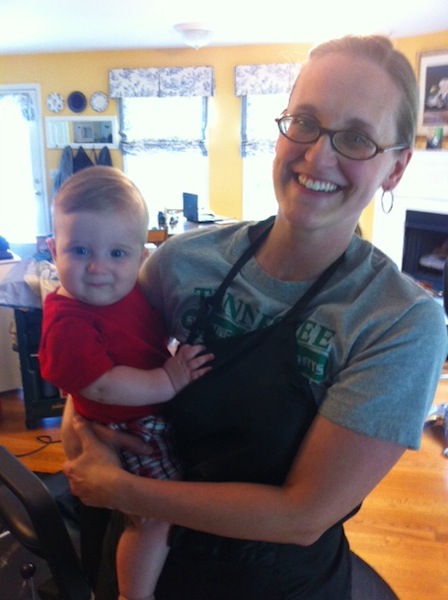 Of course, it helped that he had the best hairdresser in the world – my precious sister, Leah! 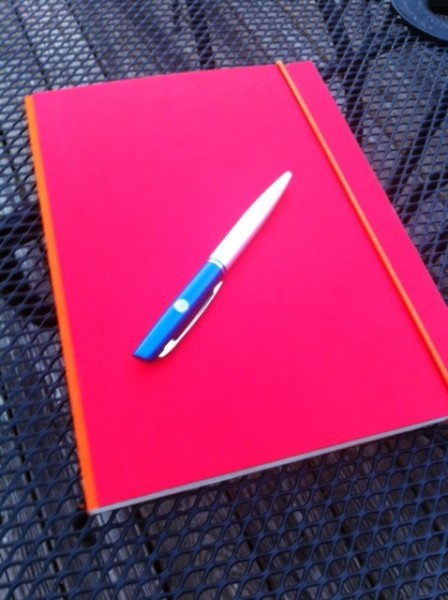 Through the years I’ve heard people tell parents they should write down their kids’ funny or memorable moments. So, we’re doing just that! The first page of this book is titled “Daddy and Mommy Remember.” We’ve already filled up quite a few pages and there are many memories yet to be made.

Do you have a memory book for your kids?

What a character little Dalton is. He is generally a happy, smiling baby, and we are forever grateful to the Lord for that! 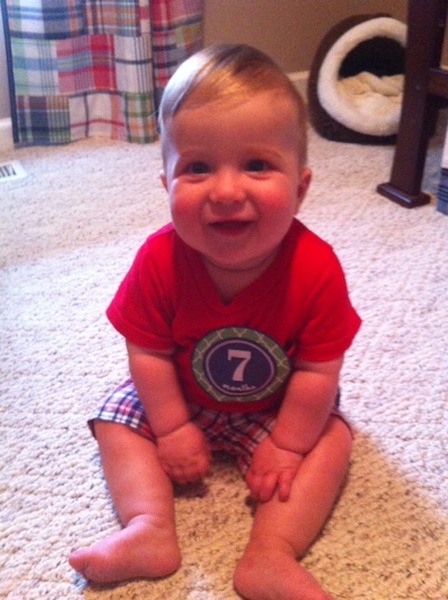 As you can see, he’s sitting up on his own, rolls over all the time and is even starting to crawl. Of course, I think he’d still rather stand over anything else. 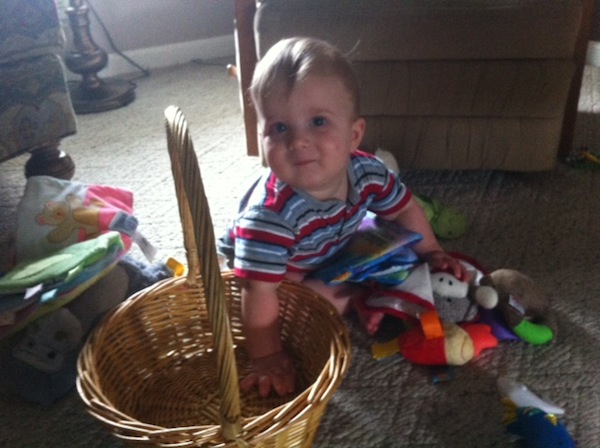 Who knew how much fun a kid could have with a basket of toys. I put the basket in front of him one day when he was fussy and he explored for an hour! 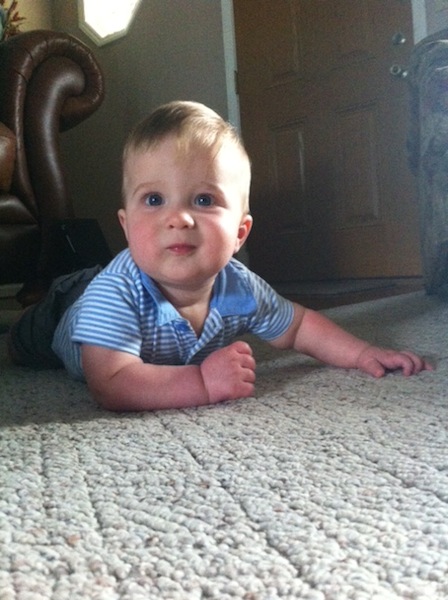 We’re working on a few signs with him. Although he doesn’t do it (yet), he knows what the sign for all done means. One day he’s going to surprise me and do it! 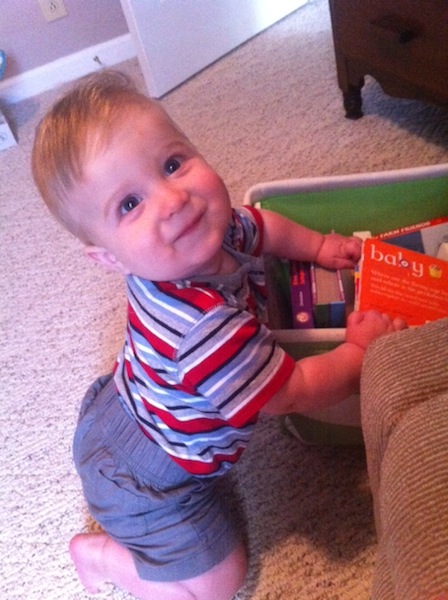 Dalton continues to love books, and if you ask him if he wants to read books he’ll give a huge grin.

Well, that’s a peek into May. What fun things are going on around your house?